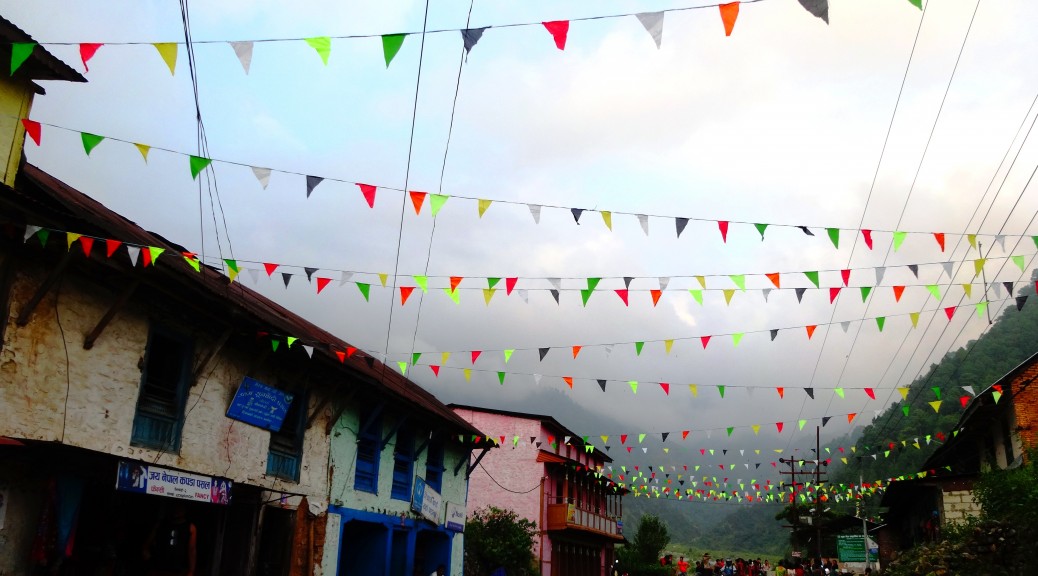 Bhimsen is the Hindu god of commerce and industry, especially revered mainly by Newaríes.

Bhimsen Jatra is held every August / September In Bhimphedi, it is the festival of the village. It is just one day but for locals is the event of the year. In the morning they make an offering to Bhimsen in the Temple of the main street, many families sacrifice a cock that they will after eat. This main street is crowded all the day, unlike the calm of any other day of the year. Some clothing stalls, balloon sellers and the usual goodies and ice cream vendors appear. At night there is a DJ for the young people, which is quite surprising, because it is very similar to any disco we know in Europe. Young people tell us excited that last year lasted an hour, and this year will last two. They also organize a Bingo! Very slow in our opinion (the 15 minutes between the numbers is long …) but again the locals enjoy it as children. Finally people carries the “Rath” (a figure of the god Bhimsen) on the shoulders. anyone who wants to carry it, surrounded by men with torches shouting “Lio Lio Ha !! Ha !! Payo Payo Ha !! Ha !!” whose translation (language Newari not Nepali) we have not been able to get. Maybe you wondered, does Bhimphedi has something to do with Bhimsen? Well, yes. “Bhim” comes from Bhimsen, and “Phedi” refers to “plain at the foot of the mountains”. In Bhimphedi we are in a valley in the first mountain range (Himal) that separates the plain (Terai) and the huge Himalayas.