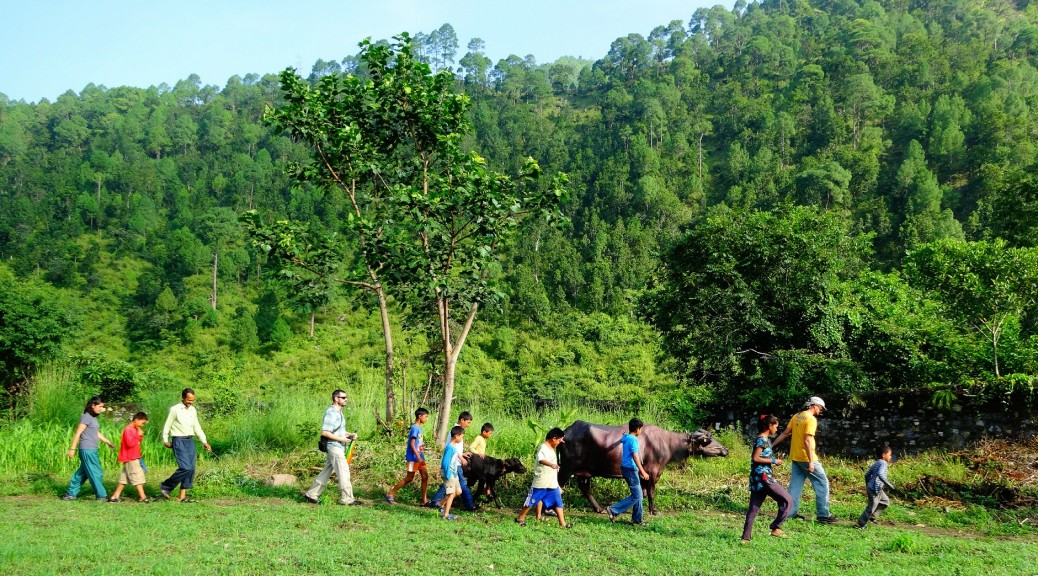 What do two Nepalis, a Catalan and four Basques do at 4 in the morning in a remote valley of Nepal?

We have a long walk up to Damar, where we are supposed to pick up our Bufala (bhaisi) and its male baby. It is clear, which makes the climb more bearable… and in Damar we are welcomed with a delicious tea, made with fresh buffalo milk.

Soon it appears… here begins the most interesting part of the morning: bring them down throw the long way to Bhimphedi without hurting them or hurting ourselves. Two hours later we arrive to Balmandir where children start shouting and running excited all around. They accompany them to their new home… and hug and squeeze the new baby of the family.

These past weeks we have been involved in preparing the stable for buffaloes and goats (bakhara in Nepali). The first thing we had to do was emptying the space that we would use as stable as it was full of wooden beams. Some of them were very long and heavy so we had to ask for help from prison workers. After Dani visited the prison at least ten times to ask for help, they finally came…

Two weeks later when the place was finally empty, we started with the reparations… and it seemed easy at first: one of the beams was broken, one of the pillars completely rotten, when replacing this one we had to move the one next to it, the metal sheet that made the back wall was set with the ripple backwards so that the water came inside, the roof needed fixes, making the door was not easy, we put an old unusable gate as part of the wall, we put six pillars to tie the buffaloes, a layer of concrete to smooth the floor inside and give inclination… Gradually the stable was taking shape. Meanwhile we also made a small extension to settle there the goats (previously we had ducks and chickens, and a dog with three puppies. This children’s home is becoming a farm!).

On the other hand, goats and buffaloes need grass, plenty of grass… so we used a part of the garden to plant grass: First we brought the ox prepare the land, then we removed all the remaining grasses and plants, and then we put the seeds. But then, to separate the area of grass from the garden area we needed a fence… so what better than to build it ourselves! We will leave this story for a future post …
So we finally have buffaloes in our farm !!

Nerea y Mikel
Long stay volunteers of Amics del Nepal for the Chindren’s Home of Bhimphedi and the program of reconstruction and improvement of the affected houses by the earthquake.

P.S. Did we tell you that Ricardo and Jorge came from Kathmandu the day before yesterday and brought 4 rabbits? Yes. In Balmandir we have also rabbits.