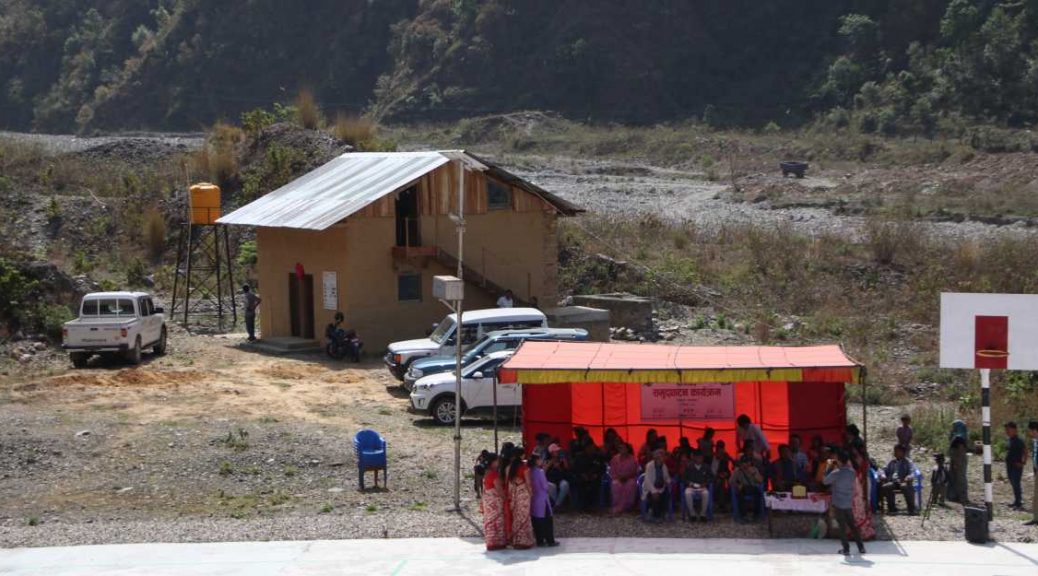 On the third Saturday of the month of April three years ago, there was big celebration in Bhimphedi: the Sports Ground was inaugurated. Many people attended this event hosted by 3E Project: villagers, the village’s authorities, political personalities, representative of Bhimphedi Project, Rotary Club of Kantipur members and Amics del Nepal volunteers. Balmandir Children organized a basketball match that everybody was very happy to watch. It was a very important day. But, unfortunately, it also turned out to be a date nobody else could ever forget: at the end of the celebration, a 7.8 earthquake hit Nepal.

Fortunately there were no victims in Bhimphedi VDC, but many people lost relatives and friends living in other districts and many others were left without a home. Moreover, the psychological effects of the earthquake were devastating: sadness and fear took over Nepal. People were not feeling safe anymore, they feared going inside the houses, in case an aftershock would happen. For many months, people were living in temporary shelters…

Amics del Nepal received many help-requests from Bhimphedi villagers, as well as many help-offerings from different entities in Barcelona. Finally three organizations decided to embark together in a joint venture: Amics del Nepal, Base-A and CCD-UPC. Their common program was named Awasuka, after the nepali words: Aawas Sudhar Karyakram (Habitat Improvement Program). Later on this program was also joined by Agragaami Krishak Krishi Sahakari and Rotary Club of Kantipur, as local partners. During the first Awasuka trip to Nepal, the team met with 3E Project members to share their concerns about Bhimphedi community. The outcome of that meeting was to build an earthquake-resistant building to teach improved traditional construction techniques and also to house dressing rooms and showers for the ground.

On the third Saturday of the month of April this year, there has been a big celebration in Bhimphedi: the Khelkud Griha (House of Sports), also called Dhunga-Mato (Stone and Mud) Prototype, has been inaugurated. Many people have attended this event, again hosted by 3E Project: villagers, members of Gaupalika (municipal authority recently created), Speaker of Region 3, representative of Ayuda Nepal, Rotary Club of Kantipur and Inner Wheel members, Bhimphedi Guys leaders, Amics del Nepal volunteers and Awasuka cooperators. Balmandir children have organized a short football match and when finished, they have been able to use the sports facilities for the first time: they have enjoyed a fresh shower and have got dressed in the new changing rooms. After this, they have also enjoyed the gifts distributed by the Inner Wheel members. During the ceremony there have been many speeches, but a very special one has been done by Mahen Shrestha, founding member of 3E Project. He has talked about the history of Bhimphedi and about how this village should preserve its heritage and natural environment. (We have asked Mahen his speech, so we will be able to post it in our blog site nextly).

The ceremony has been very moving for everybody, especially for those who attended the 2015 inauguration, as they could not help their minds going back to the sad memories of the earthquake… However, these first emotions have been quickly replaced by the positive feeling of having overcome such a bad situation and having been able to create a new beautiful building out of the blue: a building for the enjoyment of the Community, especially for all children and youths in Bhimphedi.
From Amics del Nepal we are very happy to have been able to lead the construction of this new building for Bhimphedi through Awasuka Program. We hope it will foster the good practice of sports activities in proper hygienic conditions, as well as it will also help create awareness about the importance of having a clean environment. And most importantly: we hope it will make people happy, as beauty is something that produces joy in our lives.

FUTURE
The inauguration has been particularly special for Awasuka team members, as it has meant the “official ending” of an important part of the Program. The three prototypes in Bhimphedi have already been finished and the construction of Supin houses will be ended very soon. Only retrofitted houses will be left, probably to be finished after monsoon.
Awasuka Program has been a long and exciting trip. It has been a challenging adventure of relationships among the collaborating entities, the local partners, the funders, the young cooperators on site and the local beneficiaries… There have been very good moments, but there have also been some tensions from time to time; sometimes due to differences in criteria, some other times due to cultural and language problems… but we have all overcome the difficulties by sharing a common goal: providing better habitat conditions for the people in Bhimphedi, specially the most needy ones. We are also well aware of the high expectancies placed in this program by the villagers, and we are not sure to have fulfilled them all… Although we tried our best, we have to understand that our organizations are small, modest and limited. Moreover, many unexpected difficulties aroused during the construction process, which we’ve had to overcome by keeping our team in a constant state of change and adaptation…
…but we’ve all held on to our dream and we are happy to have achieved most of the goals we set ourselves in the first visit to Nepal. And now, we are especially happy to see the “Dhunga Mato” totally finished, officially inaugurated and eventually used by the people. Children and adults walking all around, enjoying it and saying how “ramro” (nice) it was.

For all the persones involved in a construction process, once it is finished, we experience a very speciall moment of bliss and emotion. And so we all felt last Saturday.

Now, the keys of the Khelkud Griha have been handed out to Bhimphedi village. Our work has ended. Bhim Aadhar School, Gaupalika and Balmandir have agreed to organize sports activities in this place. Time will tell whether this building will eventyally be used as sports facilities, as a store-house, as a small sports resort, as a celebration place, or maybe even as a tourism office…. who knows? The use of buildings in the future can never be forecasted… But two things we are sure about are: firstly, it will always be useful as an earthquake-resistant model-house, and secondly, the most important thing: this building will always have a special place in our hearts.