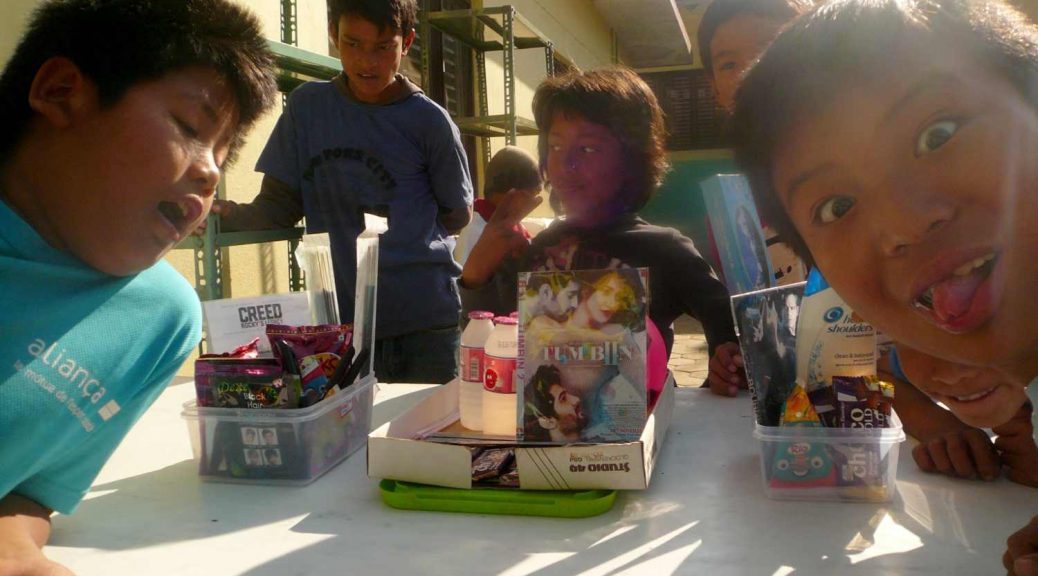 In Nepal the streets are not glazed, the trees are not decorated, the lights do not flicker night and day but even so, the 25th is a national holiday also in Nepal. So, we decided to make of it an special day for all of us, as we had already done the previous two years (2014 and 2015).

This year we organized an orientation race for all the town for the 8 groups of 3 kids from the Children’s Home. The preparations took us several days. But it was fun and interesting. We learned a lot, both volunteers preparing, and children playing.

This Christmas game in groups consisted of:

1. we gave a map to each team with a cross that they should locate and go. (The original map was provided by Mònica Sans. Raquel brought the printings in A3 format from Kathmandu). 2. Once there, the three members of the group wished “Merry Christmas!” to the shopkeeper or the family they had to find and they asked if they had something for them.

3. The selected villager told to them only the beginning of a Nepali saying or proverb. The work of compiling, transcribing and translating the proverbs was done by Manisha, with the help of the other community school teachers, books and technical help from Dani. The work of allying with the villagers was also made the day before the game by Manisha (our Nepalese volunteer), with the help of Joana and Raquel, walking around the village, map in hand, to mark the selected places for the clues. 5. Once the phrase was written, the group had to invent a small representation of a situation in which that proverb could be said. 5 more points in play. 6. Once they had done these two tests a new location was made on the map and they had to go there again. Each team had to get up to 5 sayings from different places of the town.

The locations were drawn by lottery so that some groups had to go several times to Chabeli (the farthest part of the village, uphill). It was two very intense hours. Kids ended up exhausted of going up and down, and volunteers stressed of receiving so many groups with the new phrases to be checked and scored. Finally, around twelve-thirty noon, we finished the game. The first three groups were asked to choose one of the three Christmas lots we had prepared. There was also a gift for all of the kids: speakers to watch movies and listen music. But the surprises did not end here. Kush brought meat for everyone for Christmas dinner. It was delicious! So at the end, this didn’t become being so different Christmas for the volunteers, although being so far from home we were with family, with excitement and surrounded by good food.

We leave you with the 21 Nepali sayings we used for the game. Now all the kids and volunteers can already use when necessary:

Example sentence that we represent Dani, Raquel, Manisha and I:

मुखमा राम् राम् बकलिमा छुरा।
Phonetic: Mukhmā rām rām bakalimā chhurā.
Literal: In the mouth Ram Ram, in the pocket a knife.
Meaning: When someone says good things, but later in the facts he betrays his own words. The 20 sayings the kids had to find in different locations in the village:

घरको बाघ् वनको स्याल्।
Phonetic: Gharko bāgh vanko syāl.
Literal: House Tiger, Jungle Fox
Meaning: When someone is very stubborn and rude in house, but later outside when someone does something wrong to him, he doesn’t dare to confront.

हुने हार् दैव नटार्।
Phonetic: Hune hār daiva naṫār.
Literal: What has to happen, God can not stop.
Meaning: Noone can do anything for the inevitable events.