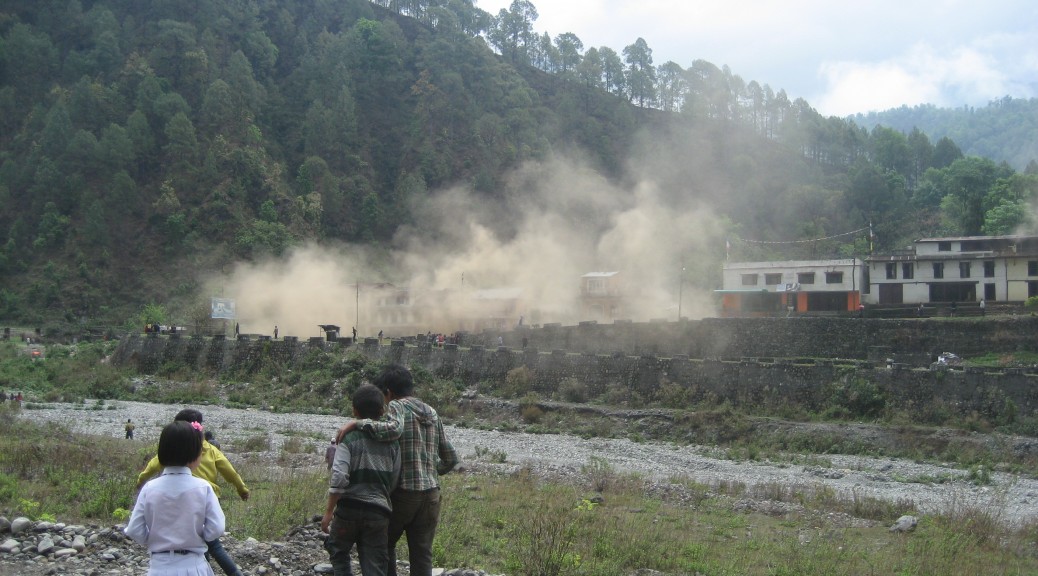 On the way to the children’s home we saw the first consequences of the earthquake (7.5 Richter scale) Many houses made of stone and mud, have been affected by the earthquake, some had cracks, some need a piece of wall and others are completely destroyed. Few houses have remained intact. Fortunately, many people were on the sports court (see the post of the act) and others outside the houses, so we didn’t have injured people, but they were strongly affected, especially those who have lost their home and shop. We hurry with the children to come back to the center and meet the other kids to see if they’re right. In the children’s home, only the volunteer’s house (an old building of the Rana dynasty) has been affected. No light, no mobile phones… We have no battery to charge mobiles or computers … After a while the earth trembled again, this time more gently, everyone wonders if it will return the strong earthquake. They are coming rumors and mixed news, so we don’t know how can be the rest of the country…

Seems that there are no serious injuries in Bhimpedi, but many people have lost their homes. Our four workers that we have in the center;  Beli and Ram, they can’t live in their homes … and Maya and Santa Maya’s houses have been cracked. Everyone is sad, but mostly of them scared. They all sleep in the streets, now they don’t feel safe in their own homes, now there are dangerous places. So, they sleep all together in the street and they spend hours with family and friends, giving support to each other. At night there are five or six earthquake aftershocks, soft but enough strong to shake the ground and the villager’s hearts. At the morning we follow with no communication with the outside and we get confused news, some expect a stronger earthquake. . Schools, shops and medical centers, everything is closed. But the streets are crowded, groups discussing the same issue “was the strongest earthquake I’ve ever experienced”, “there has been no equal in the past 80 years”…

At night the situation is even more complicated, it seems that there will be storm tonight … People did not dare to enter inside the homes because they are convinced that there will be another earthquake of level 9, but they cannot sleep in the street … the center workers come to sleep with their children in our children’s home and we slept together in one room, close from the exit. This night there was a couple of trembling, but very soft.

In the morning, finally becomes the light and we can charge mobiles. We can communicate with the outside and talk with our friends and family. We also can read the Newspapers and see that Kathmandu and Sindupalchowk the earthquake was devastating. The newspaper speaks about 3,000 dead but it can become 8,000. It is a sad day but we have to be strong, smile and be together. At night we projected a film on the outside, just after the film we feel another earth’s trembling. They are very soft but there not calm the situation … Hopefully at night there’s no more. Now, while some children snore, we are writing this post and we will try to send to Barcelona by phone. If you are reading this it means that we have been lucky. Thank s to Barcelona’s volunteers and to you for following us.

We send you a warm hug from Bhimpedi and we keep in touch!!