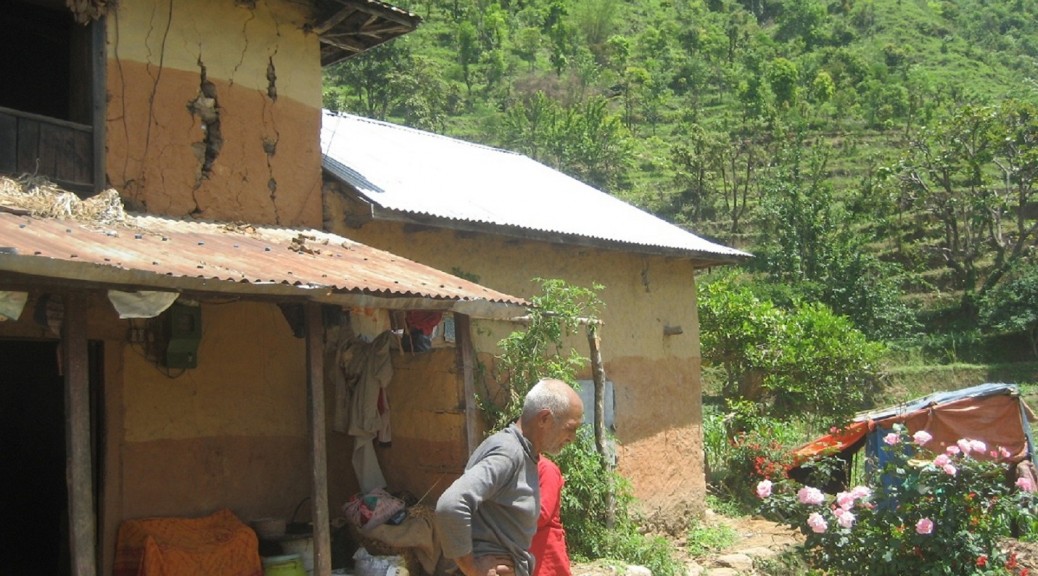 If you haven’t read how we managed to buy the tents, read the last post The Tents Adventure.

Next morning Laura, Ram and I meet with the objective to distribute the 123 tents that we have brought from India. First we prepare a table to keep record of the families to which we will handle the tents so that afterwards we can trespass the information to the VDC (the equivalent to the major in Bhimphedi). We also write a letter of donation of the material to the VDC. At that time there are many villagers in front of the school waiting for their tent and food that they are distributing thanks to the donation of the jail. But suddenly, the people that were waiting outside begin to enter in the class and a big argument starts. From what we understand, it seems that some want that we begin the distribution in their ward. In Bhimphedi there are 9 wards and each of them is inhabited mainly by people of the same cast. So, each cast wants to start the distribution between their relatives and friends. More and more people continue entering in the class. Some say the tents will be given first to those who have their house completely destroyed; others claim we have to start with their ward. It doesn’t look like there will be any agreement… But after an hour of argument everybody agrees in the following. There is going to be a leader of each ward that will take a number of assigned tents and he will be the responsible to distribute them in his ward. Everybody is satisfied with the final solution so we distribute the tents. Finally at 2 pm all tents are distributed and we can go home! The process has been quite surrealist but the point is that at night it starts raining and we are happy that 123 tents are being useful to 123 families to give them shelter. Thank you very much to the volunteers and donors of Amics del Nepal, and also to Ram Lama, Anju Lama, Laura Conde, Dharmaraj Rijal, Ram Bahadur Adhukari and Surendra Kumar Thapa!

Two days after that, we go on expedition to the nearby mountains to see how they are using the tents and see the needs of the people there. It’s not an easy job… It’s extremely hot and only the first few kilometers can be done by motorbike. To reach the rest of the villages there are only small paths that go up and down the hills. We pass past houses and more houses and everybody wants to show us theirs. Many have a part destroyed but most of them only have cracks and some holes. But anyway, most of them don’t dare to sleep inside because they’re not sure if they are safe in their houses. They have used the tents to built cottages that will be their shelters for an undefined time. Very few will be able to build a house before the monsoon that is approaching (time of intense rains that takes place from June to September). Some will start building their house in October after Dashain (national festival equivalent to our Christmas). But most will not be able to build a new house in the immediate future because they don’t have enough money to pay it. The government has promised loans for those who have lost their homes to build a new one. But nobody thinks this measure will be easily implemented and in any case, nobody thinks it will be done soon. Therefore these cottages will be their homes for many months.

Some days after, VDC distributes some more tents that they have received in ward number 9. But they are overwhelmed by the demand and the 30 tents and the mattresses donated by Amics del Nepal are not enough again.

So we must return to work. Tomorrow we will try to bring more tents from India… The adventure “Tents 2” starts. Second parts never were good, or so they say… But there are always exceptions…

Meanwhile in Balmandir we keep working hard and willing to start new projects in the center and collaborating with the government school and the community. It is not true that all the problems of Nepal have arrived with the earthquake. A lot of people want to help “rebuilt Nepal after the great quake” but the truth is that this country already had big problems before the 25th of April. Undoubtedly it has been a big natural disaster in which more than 8,000 people have lost their lives and lots of buildings are now collapsed or damaged. But in my opinion it’s important to continue working in projects of empowerment of new generations and women and promote activities that can give opportunities to the most needed so that they can improve their quality of life and their country. I have lots of friends that have asked me how to help Nepal now. This answer says a lot of them. Even Catalonia it’s not undergoing his best economical moment, Catalans want to support people who are in need in the rest of the world. That’s why, to these friends I would recommend to collaborate with the projects we are developing here in Bhimphedi and that we will keep explaining in this blog.

You can do so, by doing a donation to Amics del Nepal with the concept “Bhimphedi”